After sampling the far west coast of Mexico for a week, it was time to switch sides to the far east. Our transit day just happened to fall on my birthday, which unfortunately could not be avoided without sacrificing time in one of the locations – something I didn’t want to do. So at least birthday 29 will be memorable for the 16 hours spent in three airports, two flights, two buses, two taxis and one skytrain. But I was surprised with a piece of birthday cake at the half-way point which made for an interesting update on Karina’s Facebook.

Our final destination was the Yucatan Peninsula – a large piece of land with the Gulf of Mexico and the United States to the north, Cuba and the Caribbean Sea to the east and Belize and Guatemala to the south. Most famous for the resort and party destination Cancun and the amazing remnants of the Mayan civilisation dotted across the peninsula. 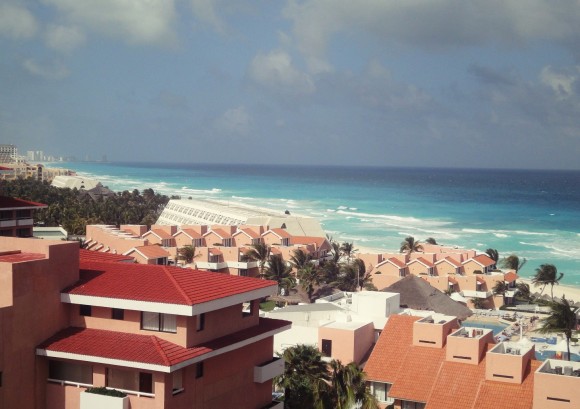 We chose Cancun for a few days more out of curiosity than anything else. The hotel and resort zone is set on a spectacular D-shaped stretch of land that juts out into the Caribbean Sea. Inside is a large lagoon used for every water-sport imaginable. It was established in 1974 as a tourism project by the Mexican Government, who promoted it strongly in the United States – which worked dramatically. 40 years on and the place is still littered with two distinct groups of Americans – 18 to 25 year olds looking to party and 55 to 75 year olds who’ve bought into time-shares. 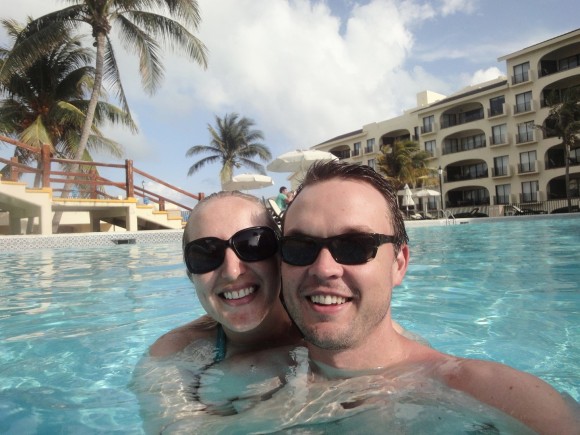 To get around the 14km stretch of the resort zone there is a surprisingly cheap and effective bus system. For 70 cents (AUD) you can hop on and do the full length back into the city centre. The drivers are employed by the state and get a percentage of every person they pick up. This results in something resembling Bathurst for buses as they hoon up and down frantically changing lanes looking for anyone ready to jump on. And you need to hang on because they quite comfortably get up to 90kms, and slam on the breaks as soon as someone sticks their hand out. There is more than one occasion we find ourselves checking to see if Sandra Bullock is behind the wheel. 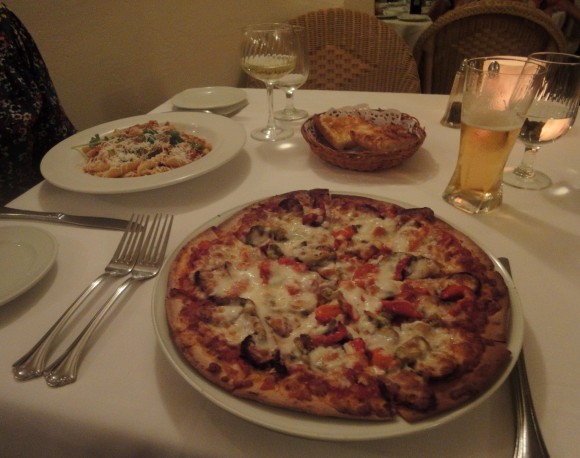 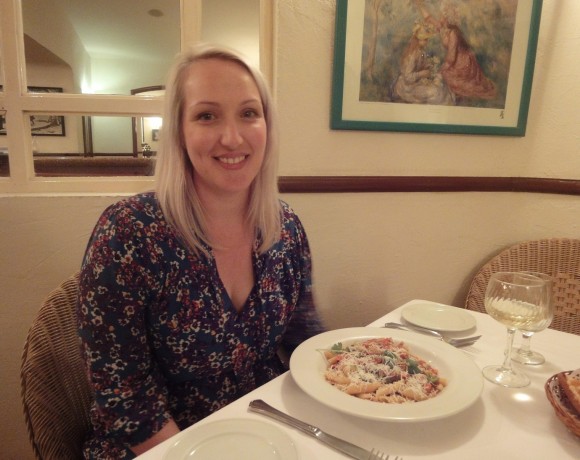 To make up for the transit birthday, we head out to an amazing Italian restaurant called La Dolce Vita (another Trip Advisor winner) then roll on to sample the local nightlife. Despite being two weeks after the Spring Break crush it is still packed with party-goers. The bars and clubs offer interesting ‘All You Can Drink’ deals – but of course there is a catch. You pay between $10 AUD and $30 AUD per person depending on the place, which covers your entry and all your drinks. But if you want to be served at the bar or have your drinks brought to the table then you need to tip your server a couple of dollars per drink. Still works out a whole lot cheaper than a night out in Australia, but hardly the unlimited free drinks plastered all over the signs outside. 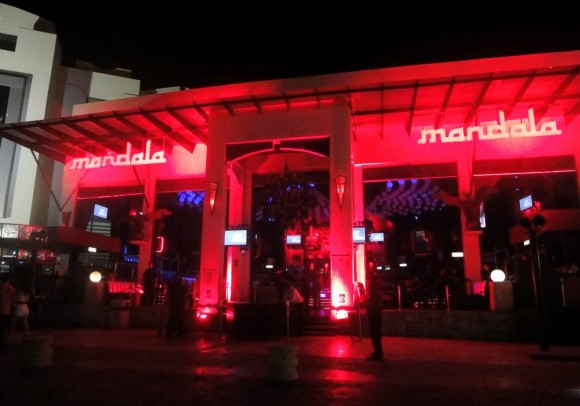 While the locale is stunning and some of the hotels jaw-dropping, Cancun proves to be everything we expected – fairly tacky and Americanised. But as the gateway to the Yucatan Peninsula, definitely worth a curious visit. Our most authentic experience proves to be translating our requirements for the next 5 days worth of bus tickets and (somehow) successfully procuring them from the Spanish-speaking lady behind the window.

Bus travel in Mexico is a surprisingly positive experience. I’d read numerous websites and travel blogs promoting it as a clean, safe and reliable way to get around the country, but still didn’t expect new air-conditioned coaches with TV’s showing Hollywood blockbusters. And cheap too. Our first journey of 3 ½ hours worked out to be about $12 AUD per person, with periodic stops in towns for local merchants to bring on everything from chips and ice blocks to beef burritos. My research had turned up quite a few stories that the bus companies have tried very hard to create a positive reputation – even working with drug cartels in the northern regions to ensure that their tourist buses are never targets. After all there’s nothing that kills the tourist trade better than danger and uncertainty.

Our first stop is the astounding Chichen Itza (Chee-chen Ee-tza). This was the centre of the Mayan universe for a couple of hundred years from 900 AD. More recently, famed as one of the ‘New Seven Wonders of the World’, and the place where the world’s media converged on the 21st of December 2012 awaiting the end of the world. Of course it didn’t happen, so apparently everyone just partied for a couple of days.

We had booked a stay in a resort right alongside the archaeological park – this proved a master-stroke for two reasons: 1. The resort had its own gate away from the main entry point, and 2. Resort guests were allowed priority entry to the park for one hour before the main gate opened. We had a private tour guide take us in at 9am sharp, and the pictures above and below are not photo-shopped – we were able to get countless snaps without people in the foreground or background. 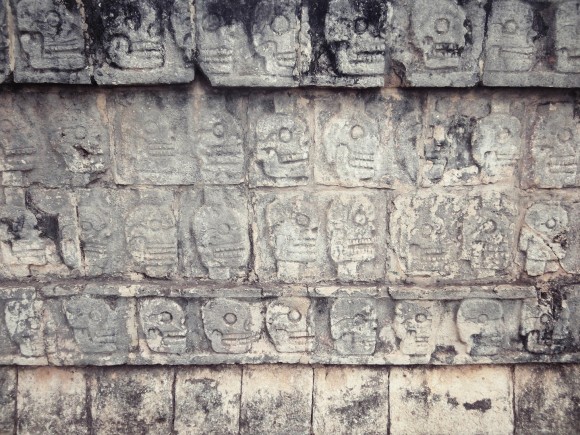 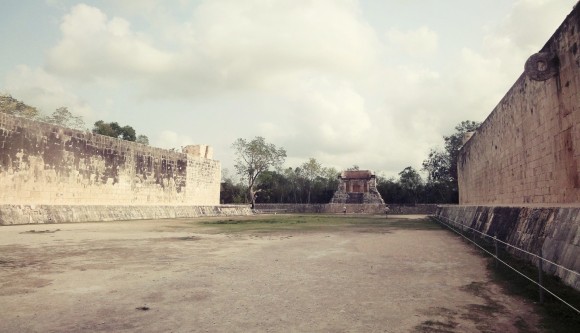 The main pyramid structure is amazing. Not on the same grandiose scale as the Egyptian pyramids, but made all the more impressive by what it stands for. ‘El Castillo’ as it is known is not a religious monument or a burial place for Mayan kings – but the world’s largest calendar. The Mayans are well known for their amazing work in this field, and this is the jaw-dropping tribute to their accomplishments. There are 91 steps on each of the four faces meeting at one large final step at the top – 4 x 91 + 1 = 365. The north-east and south-west corners are aligned in such a way that during the spring equinox the sun travels a direct path between the two points. The shadow projections and heat from the sun also creates a phenomenon whereby it appears that a serpent is slithering down the steps, complete with two large serpent head sculptures strategically positioned at the base. 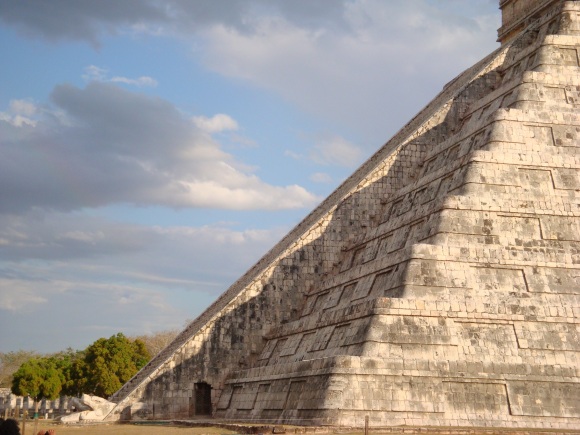 * An example of the slithering serpent taken during the 2009 Spring Equinox (image from Wikimedia.org)

To prove that they were human and not some superior alien life-form, about 300 metres away from the main structure there is an unfinished scale model about a quarter of the size. Our guide explains that the northern elevation faces directly north, as opposed to the real one which faces more to north-east. It is believed this is where the Mayans first established that the earth rotated at an angle, and made the necessary corrections for the main structure. It’s amazing to think that 1,000 years ago they were aligning a 10-storey structure to the path of the sun, where today your average builder can struggle to keep a 3m wall straight.

By midday the sun is high in the sky getting the temperature up to 40 degrees and the Cancun tour buses have just arrived. There must be 10,000 people swarming the park now, so we make our exit for another Yucatan wonder. Dotted across the peninsula are numerous underground freshwater swimming holes called ‘cenotes’ (se-no-tays). We find one of the better ones Ik-Kil just a short ride from our hotel. The first glimpse down into the cavern is simply stunning. Sunlight breaks through the canopy of trees and vines illuminating a beautiful deep blue-green water that goes to a depth of 30 metres. We swim out to the middle and look up at the sun glistening through – it is truly a breath-taking scene. As the numbers start to swell we head back to the hotel completely overwhelmed by the natural and man-made wonders of Mexico.

Our next journey on the bus is to the emerging travel destination Tulum (To-loom). It is about two hours from Chichen Itza through some tiny towns and villages – a great snapshot of the real Mexico. Tulum is becoming a must-visit locale as it combines the stunning Caribbean waters with some impressively positioned Mayan ruins. There is no high-rise and a strong alternative (read hippie) vibe to the place. And still relatively cheap, so littered with back-packers. Despite some high-end resorts popping up on the outskirts, the highest rated accommodation on Booking.com is an air-conditioned Hostel offering rooms for $40 AUD a night with breakfast included. Each room is themed to a famous Mexican person or figure. Ours is Frida Kahlo, an artist best known for her self-portraits and strong views on feminism. Unfortunately we didn’t get the Speedy Gonzalez room – maybe next time. The breakfast turns out to be all you can eat ham and cheese croissants (the best, even better than Paris) with coffee and juice.

We spend a full day getting out to explore the ruins and some of the most spectacular ocean scenery on the planet. Somehow the pictures don’t seem to do it justice. 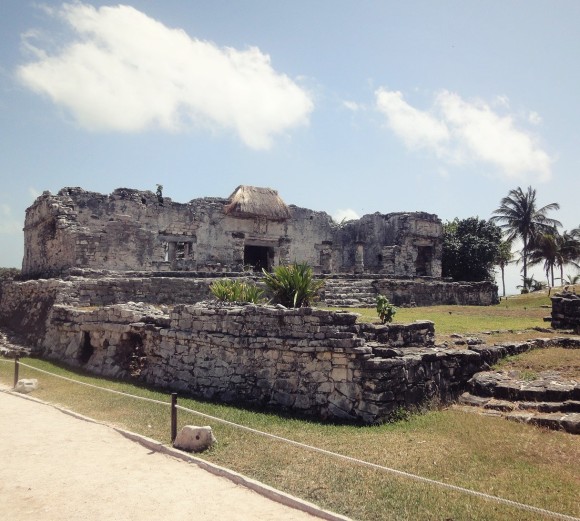 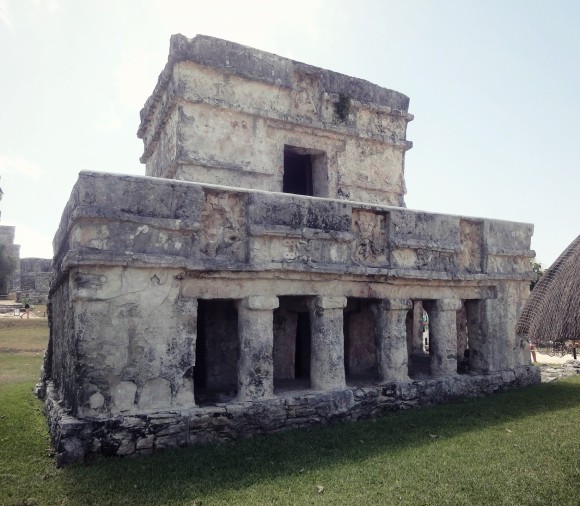 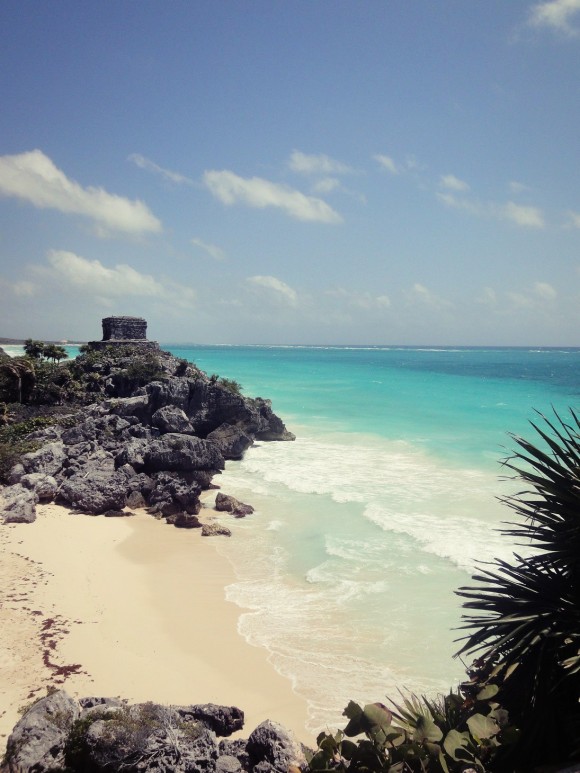 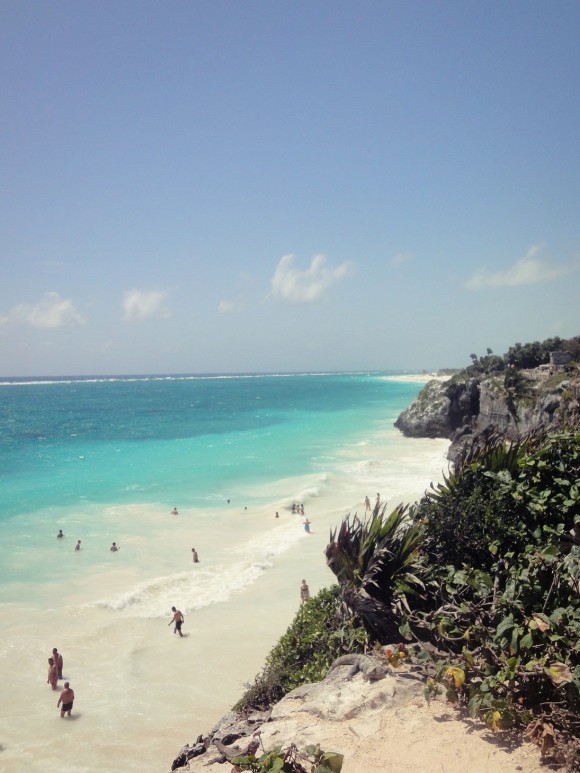 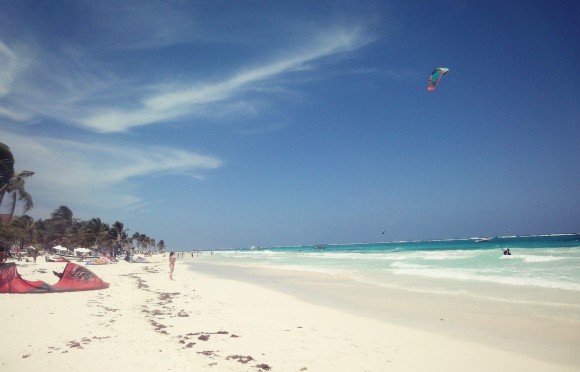 That night is our last in Mexico, and again Trip Advisor serves up a stunning result for dinner. We find La Malquerida in one of the back-streets – a basic bar / cantina serving cheap Mojitos and Margaritas and the best Mexican food yet. We take on the shared (2 person) taco feast with strips of arrachera steak cooked with bacon, capsicum and cheese melted over the top all served on a sizzling plate. Less than $20 AUD including drinks – unbelievable. 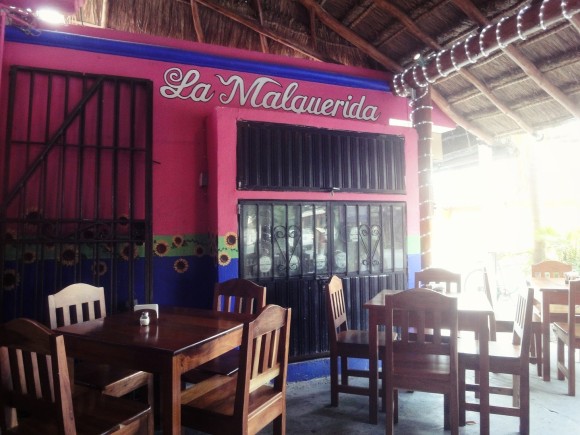 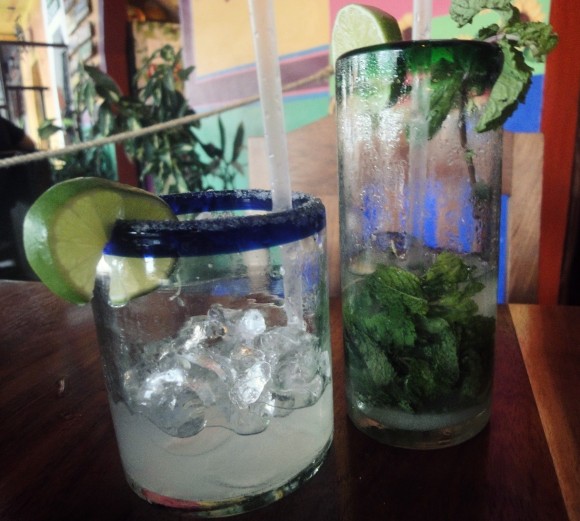 After dinner we continue drinks at the bar in rope swings chatting to the owner. As a gesture of thanks for visiting his restaurant he draws a picture of Karina and I enjoying Tulum. When our card is declined by the ATM outside, he then proceeds to drive us around for 15 minutes searching for a bank that will take an Australian travel card, avoiding the ones known to have skimming machines. He certainly earned the tip that night.

On the walk home we reflect on the fact that we have negotiated 13 days in Mexico eating out for lunch and dinner with absolutely no problems. Yet if you get Mexican at home – even at a restaurant – you are a good chance for an upset stomach. It is also surprising that most of the bastardized Old El Paso creations are common eating, just cooked in a more traditional fashion. No doubt something we will be learning how to do when we get home.

So for all the time spent checking US travel warnings and worrying about visiting Mexico, it proved to be a very enjoyable and safe adventure. No doubt they have a lot of problems in the central and northern regions, but the tourist zones and sleepy coastal towns down south seem completely disconnected. Which is just what we had hoped for.

2 thoughts on “The Yucatan Peninsula”